Simulation of ring rolling with FORGE®

Ring rolling is used to produce rings, for example for the aerospace industry (engine components) and the energy industry (windmill parts). The automotive industry also employs ring rolling to manufacture bearings, most often at ambient temperature.

Ring rolling of a low alloyed steel shaped ring used as a bearing in a windmill. This simulation was carried out with the UPEM module which, in that case, was fed by Muraro, a press and ring rolling mills producer and a Transvalor customer.

FORGE® allows an accurate prediction of:

Ring rolling of a waspaloy shaped ring for the aerospace industry, with microstructure prediction. Average diameter (µm) is represented on the ring itself and plotted on 3 sensors. 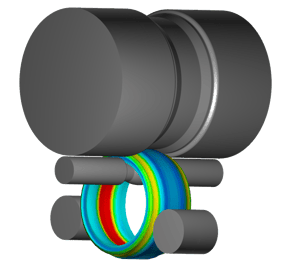 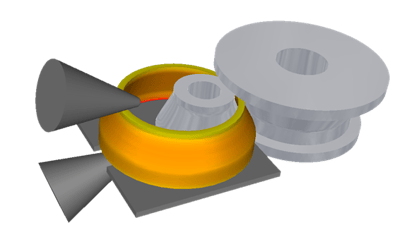 FORGE® is the best simulation tool for the definition of the entire production of high technology screws, from forging up to thread rolling.
END_OF_DOCUMENT_TOKEN_TO_BE_REPLACED
May 1, 2018