NTN-SNR Roulements, part of NTN Corporation, is based in Annecy (France), world leader for bearings, transmission joints, linear modules, distribution rollers, suspension parts. Its activity is primarily automobile-oriented, and other sectors in industry such as aeronautics, rail, and the farming and mining sectors.

NTN-SNR uses the FORGE® software to simulate the induction hardening process used in manufacturing bearing rings. This treatment is applied on mechanical components in order to create a local structural hardening over a precise depth while still minimizing geometrical distortions and residual stresses. For bearing rings, this makes it possible to obtain a high hardness on the ball-raceway contacts while maintaining sufficient ductility elsewhere.

This process is complex because it requires a coupling between the electromagnetic, thermomechanical and metallurgical phenomena. Numerical simulation is commonly used in the initial design phase of the inductor and of the quenching system.

The difficulty resides in finding the ideal operating point for the generator and in predicting the metallurgical properties of the quenched part. Thus, by conducting this study, NTN-SNR wanted to understand:

Solution: consider the characteristics of the current generator

To digitally simulate the behavior of the generator, FORGE® incorporates an iterative algorithm that accurately calculates the frequency and the intensity in order to maintain a constant power equal to the setpoint. Simulating the induction heating is carried out using two solvers of which the first one solves the electromagnetic equations and calculates the power density generated by the induced currents, while the second solves in a coupled manner the thermal-mechanical-metallurgical equations. The two solvers are coupled in order to update the electromagnetic properties of the part. 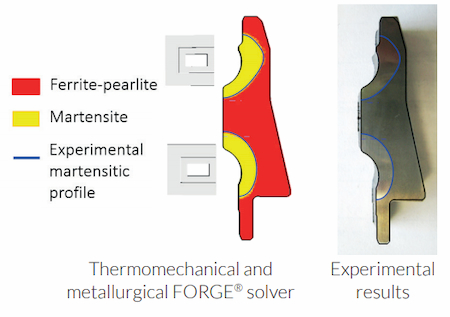 The solution chosen to report on the behavior of the generator allows:

By integrating the generator into the simulation, NTN-SNR was also able to optimize its parameters and determine the current and the frequency of the inductor that is optimal to carry out for the production phase. A good agreement is found between the electrical values recorded (voltage, intensity, frequency) and the simulated behavior of the generator.

The solution makes it possible to highlight a strong correlation between the simulation and the experimental measurements on: 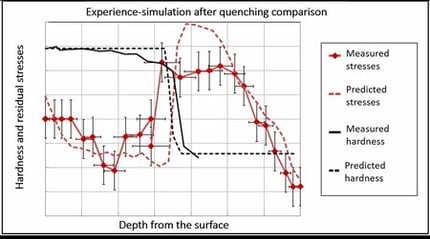 «The work carried out with the support from Transvalor made it possible in the FORGE® software to implement a new description of the behavior of the power generator. Integrating the operating point of the generator into the simulation makes it possible to obtain a single and full solution for developing the entire induction hardening process. »

Benefits: simulate the process as a whole

With FORGE®, NTN-SNR benefits from a fast and predictive solution, which makes it possible to simulate the process as a whole from the generator to quenching.

The solution was validated experimentally on C56 steel bearing rings which thus allows NTNSNR to:

All of these elements have allowed NTN-SNR to optimize the settings of the generator in order to propose a solution that takes account of all of the steps of induction hardening.

NTN SNR, manufacturer of mecanical bearings for the automotive and aerospace industry, use the software FORGE® to optimize its processes.
END_OF_DOCUMENT_TOKEN_TO_BE_REPLACED