COLDFORM® is the best simulation tool for the definition of the entire production of high technology screws, from forging up to thread rolling.

Simulation of thread rolling with COLDFORM® 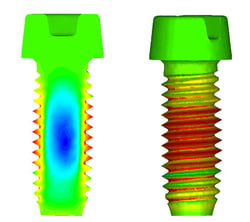 Thread rolling process is used to produce the screw thread. With this process in its portfolio, COLDFORM® is the best simulation tool for the definition of the entire production of high technology screws, from forging up to thread rolling.

COLDFORM® features a precise contact algorithm and a temporal integration scheme for updating the coordinates naturally adapted to rotation which render the simulation of cross wedge rolling highly accurate. Resorting to tricks such as forcing component rotation or blocking its displacement is unnecessary. Simulation, in this case, becomes a real predictive tool which can be used to fine-tune the process.

COLDFORM® allows an accurate prediction of:

This video shows the simulation of thread rolling of a screw, with the distribution of equivalent strain

Underfilling areas can be detected with COLDFORM®

COLDFORM® software allows the simulation of mechanical joining processes such as clinching or riveting and predict mechanical properties of the final part.
END_OF_DOCUMENT_TOKEN_TO_BE_REPLACED
Jan 8, 2021

COLDFORM® is dedicated to cold forming processes. Its functionalities cover a wide range of processes such as cold heading, stamping and fine blanking
END_OF_DOCUMENT_TOKEN_TO_BE_REPLACED