Simulation of bending processes with FORGE® Thickness analysis during the bending process of a tube 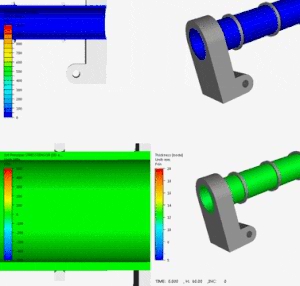 Simulation of bending a tube with local heating via induction

The example above made with FORGE® software presents a complex bending operation of a thick tube. The steel tube is heated locally via induction in order to facilitate its deformation. During heating, metallurgical changes occur. The calculation makes it possible to estimate the efforts required for this process and to predict the local thicknesses of the tube after bending.

Cutting processes occur at different stages of the workflow.
END_OF_DOCUMENT_TOKEN_TO_BE_REPLACED
May 1, 2018