Tubacex used FORGE® and THERCAST® to compare the quality of two manufacturing routes (forging or blooming) to produce round bars with a new ingot design.

Tubacex is a seamless steel manufacturer founded in 1963 and established in Bilbao, Spain. The company provides a wide range of innovative tubular solutions such as tubes, pipes, fittings and special components (tailor-made dimensions and designs). Tubacex gathers several companies located all around the world, allowing to get a leading position on many industries including oil and gas, power generation, petrochemical, fertilizers, aerospace, automotive and engineering. One of the most important asset of the group concerns the fully integrated production: bars production, hot and cold forming and distribution steps are all carried out by Tubacex.

The hot forming operation consists in either a forging or a blooming process.

To evaluate these two manufacturing routes, various metallurgical parameters have been checked to figure out which one is the most efficient: temperature, load distribution, von Mises stress, porosity, grain size evolution, strain.

Casting, forging and blooming operations carried out at Tubacex facilities

STEP #1 : THERCAST® software has been used to develop the new ingot design (ingot weight and dimensions, molds, etc.). Tubacex engineers have designed and simulated the ingot pouring from filling to solidification and have analyzed in which proportion metallurgical parameters would be affected by the design and the process conditions.

The casting process has been validated tracking the temperature evolution thanks to three thermocouples located at different levels into the ingot. Simulation results have been found very close to the experiment which consequently validate the input process parameters such as: metal and molds thermo-physical properties, heat transfer coefficient between metal/ambient air and metal/molds, etc.

Furthermore, the ingot casting simulation has allowed Tubacex to analyze the solidification of the metal focusing on secondary shrinkage and porosity risk (Niyama criterion), which are important factors for the following hot forming operations. This analysis has allowed Tubacex to choose the most suitable ingot (AC68) among nine different designs. Simulation predicts a risk of voids in an area of nearly 20mm at the ingot centerline and a risk of porosities in a critical area of 50mm diameter.

STEP #2 : Then, the simulation results have been transferred into FORGE® software, devoted the simulation of hot forming processes. In order to choose the most suitable hot forming route, Tubacex decided to evaluate four important parameters on both the forging and the blooming applications: load distribution, von Mises stress distribution, porosity analysis and grain size analysis.

Regarding the forging process, each strike generates some increase of the plastic strain and heat dissipation inside the workpiece. Therefore, the load tends to increase one pass after the other. This is the reason why the intermediate reheating takes place. After a first series of passes and the workpiece rotation, the load significantly increases as the new hammered side has been cooled down. Consequently, a higher forging load is required and the simulation shows that the tonnage exceeds 2000 tons which is the maximum capacity of Tubacex forging equipment.
For the blooming process, the simulation indicates that the axial force applied on the upper roll does not exceed 1.1 metric ton. This force can be easily supported by the rolling mills available at Tubacex.

Von Mises stress distribution has been observed in cross section at several steps of the hot forming processes. By comparing the results by the end of the sequence, FORGE® shows that the stresses are less important and more homogeneous with the forging process (a). The blooming process leads to more heterogeneity and side effects inside the part (b).

The porosity analysis shows that throughout the forging sequence, all porosities decrease in a steady decline. They are completely closed when the ingot reaches a diameter of 370mm saying about one third of the process (a). For the blooming process, the porosities start to decrease after half of the process. But they do not completely close and remain heterogeneous around the core (b). It can cause voids and other weaknesses on the final part. 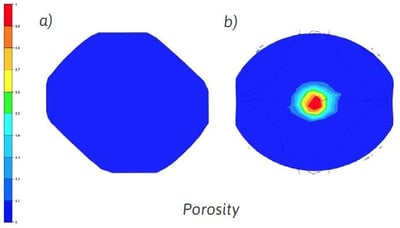 Whatever the application chosen by Tubacex, the part undergoes increasingly significant deformation throughout the process, which increases temperature and involves microstructural evolutions. The initial grain size of the ingot is 3 ASTM and it will more or less increase according to the hot deformation process.
By applying the forging process, the grain size reaches a mean of 8 ASTM. At the end of the sequence, FORGE® shows that the part microstructure is almost homogeneous (a).
The results are less satisfying for the blooming process. At the core of the part, the grain size is 4.5 ASTM and by getting closer to the surface, it reaches 9.5 ASTM. Therefore, the microstructure is more heterogeneous and indicates less deformation at the core of the part (b). 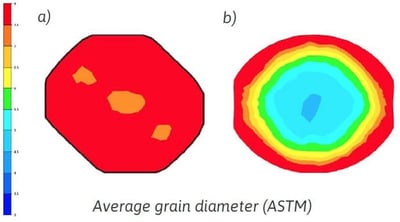 Based on the simulations results, the forging process is more suitable than the blooming process since forging the ingot allows to get better final properties (stresses, porosities, grain size). However, a limitation remains as the forging equipment used by Tubacex cannot apply the maximum load indicated by FORGE®.
Hence, the decision has been taken to confirm the forging process as the most suitable manufacturing route. Furthermore, a compromise has been reached by manufacturing ingots of a smaller size to keep all the benefits of the forging route and getting at the same time a forging load compatible with Tubacex equipments.

« Seamless stainless steel tubes are used in high resistance corrosion environments present in the oil and gas industry, the chemical sector, the mechanical engineering industry and the nuclear industry. The increasing competitiveness between manufacturers in those industries gives them plenty of incentive to make their processes in raw material and energy usage more and more efficient. For this reason, Tubacex developed a simulation model linking both software THERCAST® and FORGE® and has been established a highly valuable tool to detect process failures in early design stage and maximizing productivity. »

With FORGE®, it is possible to simulate the production of flat or long products.
END_OF_DOCUMENT_TOKEN_TO_BE_REPLACED